It wasn’t my time to go yet! 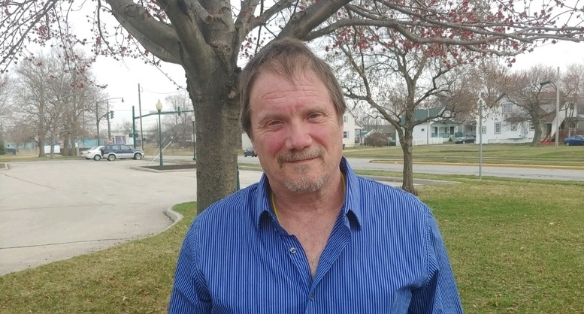 Like so many men and women who come to Faith Mission hoping to begin new lives, Ritchie had a pretty normal childhood. “I started drinking at 16. We’d go cruising in our cars and get beer.”

His consumption increased after he married the first time, when he was “just drinking on weekends.” But sometime before his 30th birthday, Ritchie started drinking “after work.” By his early 30’s he was a “functioning alcoholic.”

Over the next 30 years, Ritchie’s alcoholism became chronic. “I couldn’t wait to get off work just to drink. It was all I was looking forward to. I had to have it all the time.”

Ritchie’s drinking not only affected his work – as a driver – but also his life. “I’ve been married three times,” he says. “But none of them lasted.”

Ritchie was living in Gary a year ago when he finally “hit rock bottom.” First he lost his job, then his place to live. “I started living in my truck, then the truck broke down. I was living in the woods.”

“I was accepting that I was going to die.”

Something moved Ritchie to call his only remaining family, a nephew who took him to a detox center which referred him to Faith Mission.

Today, Ritchie is here at the Mission, helping as a driver and picking up donations in the community as he pulls his life together. “Faith Mission has been a blessing to me,” he says. “The people here are caring… they saved my life!”

His goal now is not his next drink, but getting a job and a place of his own. “I just want to be a productive member of society again. And enjoy the rest of what I have out of life.”

Thank you for helping to rebuild Ritchie’s life through your prayers and support!